It’s a scene all too familiar in Azerbaijan these days: a woman walks into a clothing store and discovers a beautiful dress that she would like to buy. But then comes the process of calculating the cost and purchasing the item.

“How much is it?” she inquires. “Seventeen Manats, 80 kopeks,” comes the reply.

The lady reaches into her purse to discover that she has only 12 of the new bills called “Yeni Manat” (New Manat) and only 50 of the new kopeks. She offers the bills and coins to the clerk who makes a mental calculation and politely reminds her that she still owes 5 Manats and 30 kopeks or 26,500 “old manats”.

Again, the lady digs into her purse and finally manages to pull out the necessary 26,500 in old manat bills. She presents them to the clerk, takes her purchase and walks out. And then she frets all the way home: “Was she charged correctly or not?”

Scenarios of this sort are quite common ever since Azerbaijan adopted its new currency. It’s almost a year since the Yeni Manat bills began to circulate. The presentation ceremony was held at the Baku’s Excelsior Hotel on December 28, 2005. Since January 2006 the new bills have gradually been introduced and circulated throughout society.

Transition Year
This year – 2006 – exchanges have been allowed in both currencies – the Yeni Manats as well as the old manats. This year is considered to be the transition year when both old and new manats are both permitted for daily exchange. In shops and department stores, charts often display the equivalent values of both currencies. But, all in all, it hasn’t been easy getting used to the new bills and new denominations. In truth, it’s been a rather slow, complicated and sometimes a quite confusing process.

Though all of the new denominations were in circulation by April, instead of people turning in all their old manats in exchange for new ones, most people just mixed them all together – offering bills in both formats for purchases and receiving change back for single purchases often in both currencies as well.

Above:Examples of Euro banknotes. Robert Callina from OeBS Company in Austria designed both the Euro and Azerbaijan’s Manat. The Euro is based on architectural designs found in Europe through the ages. In many of Azerbaijan’s banknotes, architecture features are included. Except for the one Manat and the 20 Manat bill, architecture also appears in the designs of Azerbaijan’s Yeni Manat. Azerbaijan’s currency has incorporated many of the same safeguards against counterfeiting that appear in the Euros.

It’s only natural that most people still understand the value of the old manats more than the new ones. Five thousand (5,000) old manats equal one (1) Yeni Manat. This was thought to be approximately equal to currency of developed countries (1 Manat = US 1 dollar or 1 Euro). Of course, in reality the Euro has already edged higher than the dollar.

Old Manats
The old manats were introduced as new currency when Azerbaijan gained its independence in late 1991. During the Soviet period, the currency in use in Azerbaijan was based upon the rubles and kopeks. By 1992, Azerbaijan had its own new currency printed-manats. There were no more rubles or kopeks. The manat at that time was valued at approximately 4,000 manats to the dollar.

The old currency consisted entirely of bills-no coins-in denominations of 1,000, 10,000 and 50,000 manats. Nothing larger. Since the rate was approximately 4,000 manats to one dollar, it meant that denominations smaller than 1,000, such as 500, 250 and 100 were hardly worth anything. People often collected them to pass out to beggars that they passed so frequently on the streets.

Yeni Manat bills are printed in the following denominations: 1, 5, 10, 20, 50, and 100. It would have been so much easier to do the mental gymnastics if the new currency had simply removed the zeros from the old currency in terms of value. Instead, one has to multiply the new bill by 5,000 to understand what the old amount was. For instance, we used to buy bread for 1,000 manats (about 25 cents), but now we pay 20 kopeks for it.

Kopeks
Kopeks enable the government to avoid additional expenses in reissuing money as coins being manufactured out of metal last much longer than paper banknotes. 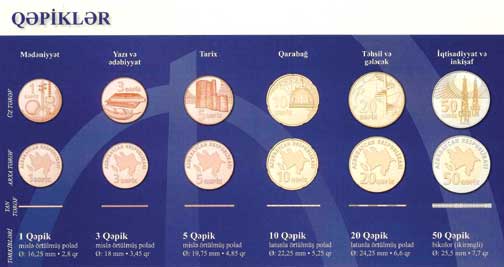 Above: Coins called “kopeks” are circulating now that Yeni Manat (New Manats) were put into circulation early in 2006.

Kopeks have been issued in the following denominations of 1, 3, 5, 10, 20, and 50. Their designs follows the same progression of themes as do the Yeni Manat banknotes: 1 kopek (Culture, featuring traditional instruments used in performing modal music-mugham); 3 kopeks (Writing and Literature); 5 kopeks (History, featuring Maiden Tower); 10 kopeks (Karabakh, territory in the western region Azerbaijan over which a bitter war was fought with Armenians from 1988 until a cease fire was signed in 1994. Azerbaijanis consider the war yet unresolved since about 15 percent of their territory has been seized and is being held under occupation); 20 kopeks (Education and Future); and 50 kopeks (Economy and Progress).

However, many problems arise with the use of kopeks. When the sum is less than half a kopek – you round the sum downwards. For example, if something costs 35.4 kopeks, you would pay 35 kopeks. However, if an item costs more than half a kopek, such as 35.6 kopeks, then you have to round upwards and pay 36 kopeks.

Why the New Currency
According to the National Bank of Azerbaijan, three explanations are given as official reasons why Azerbaijan adopted a new banknote system: economic, technical and aesthetic.

Economically, the result of inflation and devaluation of currency always carry serious consequences and cause people to lose confidence in the national currency. When the currency rate is high, it usually prompts new inflation and results in “dollarization” of the economy and monetary issues become difficult and complicated by high prices.

Technically, counterfeiting bills has become relatively easy these days due to modern technology. Counterfeit bills often circulate successfully as people are not usually very aware of the protective elements designed into banknotes and don’t know how to identify forgeries.

The Azeri Yeni Manat has been designed to counter fraudulent attempts by incorporating a counterfeiting system in consultation with the National Bank of Switzerland. They claim that the Yeni Manat banknotes have 30 different elements that can distinguish these bills from fraudulent bills.

Above Left:Ten Yeni Manat, featuring a stylized sketch of the Old City of Baku (Ichari Shahar).

Right: Twenty Yeni Manat bill features Karabakh and is illustrated with symbols of war from medieval times: helmet, shield and sword. Notice (left of center) the white outline of a flower, Khari bulbul, which is indigenous to the region.

Aesthetically, in many countries, banknotes are gathered up and taken out of circulation every four years. Then new banknotes are reissued. However, many of the old banknotes in Azerbaijan have been circulating for more than 10 years. It doesn’t take long before they look all crumpled, tattered, very dirty and consequently very inhygienic.

Nicknames for banknotes
The new currency is so new that people have not quite developed a vocabulary for it. Certain denominations of the old currency had nicknames. For example, the very small denomination of the old 500-manat bill featured the portrait of the beloved poet Nizami. People called the bill “Nizami”.

The old 1,000 manat bill with the portrait of Mammad Amin Rasulzade went by various names: “Mammad,” “Mammad Amin” and even “Baldy”. Rasulzade was the head of the ruling Musavat political party that gained independence for Azerbaijan (1918-1920). This government existed for only 23 months before the Bolsheviks took control and set up the Soviet government, which lasted until 1991.

Above Left: Fifty Yeni Manat bill, dedicated to Education and Progress. However, starting with the 50-bill denomination, the design of the banknote has very little to do specifically with anything that is Azeri. Here nothing except the honeycomb stalactite decorative architectural feature above the passage way in the center of design relates to Azerbaijan. The other architectural structures are not from Azerbaijan.

Right: The One Hundred Yeni Manat bill is dedicated to Economy and Progress. Only the small inset showing the citadel walls and double gates of the Old City (Ichari Shahar) are designs that relate to Azerbaijan.

The old 10,000-manat bill was typically referred to as “Shrivan” because it featured the 15th century palace, which belonged to the Shirvan shahs inside the Old City walls of Baku.

The old 50,000-manat banknote featuring the 12th century Momina Khatun Mausoleum in Nakhchivan sometimes was referred to as “Momina Khatun”. She was the wife of Eldagiz Atabey Jahan Pahlavi who commissioned the monument to be built in her memory. No doubt within time, the Yeni Manats will acquire their own nicknames as well.

Plans for 2007
Beginning January 1, 2007, this difficult transition period is supposed to be finished. Only Yeni Manat will officially supposed be in circulation. The old manats can be traded for new ones at banks. Maybe life will be a lot less complicated and we’ll no longer have to carry out mental gymnastics coping with two currencies.

Above: The reverse sides of all of the Azerbaijan Yeni Manat. The same two maps are incorporated into each of the designs. The larger map features Azerbaijan; the smaller is of Europe and includes Azerbaijan. A closer look at the bill shows that the subtle decorative designs behind the maps are distinctly different on each bill. Often the design is taken from carpets.